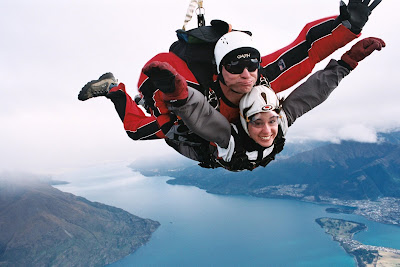 This year will be filled with wacky- random- most importantly fun.... and lookout for a travel adventure that is coming up soon.... will tell you more as details become available.... Reach for the stars.... at the very least Jump out of a plane this year..... I did with "Nzone" in Queenstown New Zealand........Go for it in 08- Lets make this the Greatest Year Ever!!!

I am petrified of heights. So why did I willingly hurl myself out of a perfectly good airplane at 12,000 ft. above the earth? In my wildest dreams and nightmares I never imagined I would skydive. So what happened? I was traveling in Queenstown, New Zealand with a crowd of Australians, who can make anything dangerous seem like a walk in the park. They managed to convince me this would be the ultimate way to face my fear. And what better place to do it, then the adrenaline capital of the world?

The night before I was scheduled to jump, I tossed and turned and prayed for a rainy cloudy day. I awoke that morning to a beautiful sunny day. I tried to enjoy my breakfast as I was completely convinced it would be my last one ever. This fear was only exacerbated when I walked into the Nzone Skydive shop in Queenstown and literally signed my life away. The first line on the paperwork read something like this; you do realize you could die doing this activity. My friend Nikki and I looked at one another in amazement. We asked one another, “what the hell are we thinking?” Luckily, our friend Dave, who was also jumping put his arms around us and said, with his endearing Australian accent, “you'll be fine, it'll be great!"

I signed up for both the video and photos. After all, didn't I need to record those moments when I completely lost my marbles? Half an hour later we were driven out to the field. The location was spectacular, huge mountains surrounding aqua blue Lake Wakatipu. We piled out of the van onto a grassy field with a small building and what seemed to be a very small airplane.

Before I got suited up I ran to the bathroom at least four times. I was shaking from the inside out. Once we were in all our gear, my instructor introduced himself. His name was Scott. As my brain was frozen, I immediately called him Dave. He gave us maybe 10 minutes of instructions. It was simple, rest your head on your instructors shoulder and hold onto your straps until the
instructor taps you to let go. The rest was even easier, make sure to look up at the camera after falling out of the airplane so the photographer gets your face and not just the top of your head.

Nicole was my photographer and would be jumping with me. She showed me the video camera attached to her helmet and then explained she would use her tongue to click on a mechanism to take the photos. She the other two photographers climbed on the plane with all of us. Nikki and I looked at one another in horror. We were really doing this. Everyone else was relaxed and joking around. I sat in front of Scott, squeezing his hands, wondering when and if he was ever going to attach himself to me. When I let go of his fingers he did and I felt a somewhat less tense.

The plane flew higher and higher and the snow-covered mountains got smaller and smaller. White puffy clouds were everywhere.

My mind was racing, and despite the smile on my face, my fists were clenched. And that's when I decided to take charge of my fear. "No more thinking." I told myself. I focused on the beautiful view. I thought, “I've committed to this craziness and there is no turning back.” I was still scared, but changing my outlook and relaxing made all the difference.

Scott checked his altimeter; it read, 12,000 feet. Before I knew what was going on the door to the plane was open. Dave, his instructor and camerawoman jumped out of the plane.


My heart fell into my stomach. The plane lifted higher with the loss of all that additional weight. Seconds later, Nikki, her instructor and camerawoman flew out the door. I watched my friends disappear into the clouds below. Now, I knew, it was really over.

Scott and I moved to the door and got into position, Nicole was already outside the plane holding on to the side and recording my every move.

"Okay Masada", I thought to myself. “Smile. It might be the last time you ever do.“ I leaned out of the plane looked up and smiled. Then I looked down and totally freaked. Every bad word I know came flying out of my mouth. A second later I was falling. The first 10 seconds out of the airplane, every fiber of my being was completely convinced my life was over, and I hated every second. Instinctively I wanted to reach for something to hold onto but I couldn't. There was nothing between the earth and myself except for the clouds.

We were spinning, doing 360’s when a bumblebee swooped up in my face. Nicole was right in front of me waving. Now I smiled. It was easy, because the wind was pushing the corners of my lips up and I had let go of my fear. What was strange was I realized I didn't feel like I was falling. In fact, all I felt was ultimate freedom. There was nothing around me, but the wind. As I fell through the clouds towards the earth. I couldn't help but marvel at the beauty all around me. Now with every fiber of my being I loved how I felt. The 45 seconds of freefall was nearly over and Scott put his hand on my forehead and leaned me back into his shoulder and opened the parachute.

A second later instead of falling, I found myself floating back to earth. The view was breathtaking and then I realized that all that connected me to Scott and the parachute were a few metal clips. Suddenly, the earth looked very far away so I wrapped my arms under his legs. After a few seconds I let go and took a deep breath. I relaxed and listened to the wind and watched the patches of blue and green get closer and closer. The silence of the wind was magnificent.

We gently landed in the grassy field where we had taken off from and Nicole was right there interviewing me on how I felt. I was shocked, excited, amazed and still trying to comprehend what I just done. Nikki ran over to me, hugged me and Dave bounded over and joined in the celebration. None of us could wipe the smiles off our faces. Even now I still can't. After all, facing my fears and conquering them, turned out to be a lot more fun than I ever would have guessed.
NZONE LINK!!!!
http://www.nzone.biz/
Posted by "Fun Girl Correspondent" at 4:03 PM

Another sunny gorgeous day here in one of the most beautiful places on the planet. I have lots to say.... and am just starting out with this whole blog biz.... so any advice on how to muddle my way thru- and spread the word of fun..... well you would make my day- and in turn- I plan on sharing my fun adventures.....

So here goes- wish me luck..... and I promise.... I will tell you more.... about my world, and about trying new things.... like learning to surf, skydiving, interviewing famous people and how silly some of them can be.... 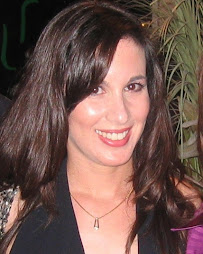 "Fun Girl Correspondent"
Masada Siegel is an international correspondent and media personality. She writes for the New York Times, San Francisco Chronicle, CBS NEWS, The Jerusalem Post and many other fine publications. She is a world traveler, athlete and has been a featured guest speaker. Contact me at fungirlcorrespondent@gmail.com